The days leading up to ovulation are the most fertile ones in your menstrual cycle. You have a greater chance of conceiving if you time having intercourse one to three days before ovulation or every two days around it.

The menstrual cycle is a pattern of changes within the ovary and uterus for the purpose of reproduction. It is necessary for the production of eggs and preparation of the uterus for a pregnancy to occur. This cycle occurs monthly from puberty until menopause.

The average length of the menstrual cycle is 28 days but can range between 25 and 35. The cycle is determined by a complex interaction of hormones. Luteinising hormone (LH) and follicle-stimulating hormone (FSH), which come from the pituitary gland, cause the growth of an egg in a fluid-filled follicle within the ovary. Although several follicles start to grow each month, only one will become mature enough to ovulate. Ovulation (release of the egg from the ovary) is triggered by a surge of LH at mid-cycle, about two weeks before menstruation starts.

The menstrual cycle can be divided into two main cycles, ovarian and uterine, each having three phases. 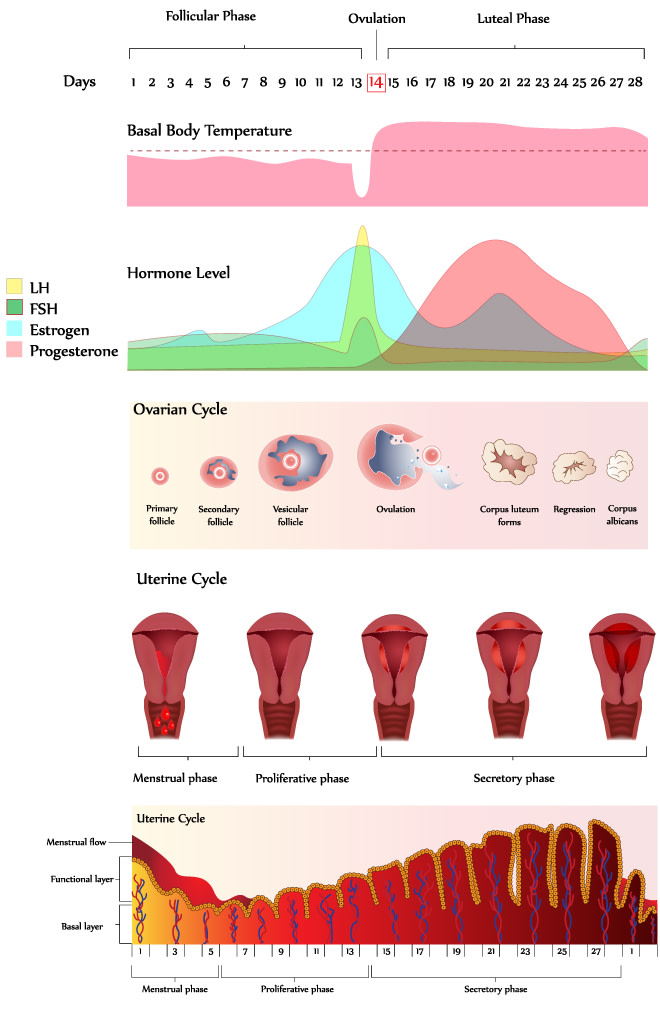 The ovarian cycle consists of the follicular phase, ovulation and the luteal phase.

During the follicular phase, the ovarian follicles mature and prepare to release an egg. Through the influence of a rise in FSH, a number of follicles are stimulated during the first few days of the cycle. Under the influence of hormones, only one (sometimes more) dominant follicle will mature and this will contain the egg. This occurs between day one and day 12 of the average 28-day cycle.

This is the second phase of the cycle, in which a mature egg is released from the follicle. Under the influence of rising estrogen levels produced by the maturing follicle, a rapid surge of LH is released by the anterior pituitary gland, which triggers ovulation and causes the dominant mature follicle to release an egg. This occurs between days 12 and 15 of the average 28-day cycle.

Some women may experience pain in the lower abdomen at ovulation. A woman’s basal body temperature may rise slightly at ovulation. Urine test kits are available to detect the LH surge, which occurs 24-36 hours before ovulation.

The luteal phase also corresponds with the secretory phase of the uterine cycle. The follicle in the ovary that produced the egg becomes the corpus luteum, which produces the hormones progesterone and estrogen to provide nutrition to the endometrium (lining). If the embryo implants into the endometrium, it starts to produce human chorionic gonadotropin (hCG) – the hormone tested for pregnancy. The hCG causes the ovary to continue producing progesterone to support the pregnancy. If there is no fertilisation and implantation, the ovary stops producing progesterone, causing the uterine lining to shed, and a period starts.

The uterine cycle consists of menstruation and the proliferative and secretory phases.

Menstruation, or the period, is the start of the uterine cycle. This flow is usually a sign that pregnancy has not been achieved. Common symptoms such as cramping, breast tenderness, nausea and irritability may occur before and during a period. These symptoms are commonly known as PMS or premenstrual syndrome.

The proliferative phase is the second stage of the cycle, when hormones cause the endometrial lining in the uterus to grow or proliferate. As the ovarian follicles start to mature, oestradiol is released, causing the formation of a new layer of the endometrium.

The secretory phase, the final one of the uterine cycle, corresponds with the luteal phase of the ovarian cycle. During the secretory phase, the follicle that released the egg (corpus luteum) produces the hormone progesterone, which allows the endometrium to be receptive to implantation of the developing embryo and support early pregnancy.

Mood and behaviour might be affected during the menstrual cycle: mild to severe mood swings may occur. The change in hormone levels may contribute to increased feelings of empathy. The days leading up to ovulation (when the egg is released from the ovary) are the most fertile ones in your menstrual cycle. This corresponds with the second and the beginning of the third week in a 28-day cycle with a 14-day luteal phase. During this fertile time the egg is moving down the fallopian tube, waiting to be fertilised.

You have a greater chance of conceiving if you time having intercourse one to three days before ovulation or every two days around it. This means that sperm are ready and waiting for the egg when the woman ovulates. If you wait until after ovulation before you have intercourse, you probably will have missed the opportunity for conception that month.

The egg can survive for 24 hours after ovulation occurs, while sperm is able to survive and fertilise an egg for two to three days in the fallopian tubes. To learn more, visit our Fertility window page.